So… have you ever walked into a movie theater and just instantly knew that the probability of you murdering someone had risen to an unbelievable percentage? Like the expression zero to a hundred is like a child’s nursery rhyme to the carnage you wanted to display. Well, believe it or not, that was yesterday. Hands down, that might have been the worse movie experience I had ever had.

Take a journey with me.

Usually, I am completely against the notion of catching a movie on the opening weekend unless I catch it that Thursday night. I tend to try to avoid this generation of low attention span, disrespectful, genetic defects whose mothers medical plans should have included abortions. (I know that might a little harsh, but the more I reflect on this experience, the more agitated I get.) I really assumed that going on a Friday or Saturday would result in me literally watching someone snapchat, facetime, or text for the duration of the movie every ten minutes because something isn’t happening on screen. Like character development or expedition isn’t necessary and everything should be played out like an episode of Family Guy or a cut-framed Youtube video.

However, none of these warnings came to mind. I willingly agreed to roll the dice yesterday when I was offered to head out to the movies to is IT  with a good friend. My head might have been preoccupied or distracted because I ignored all the tell-tell signs of foul play. The fact that movie had at least two screening every hour. The fact that the movie was current breaking block office records left and right and the movie hadn’t even been out for the weekend. Or the flaring unrealized fact that it was a horror movie and everybody was going to want to see it.

When we arrived at the theater, there were people in the lobby to buy tickets than I had seen in my last previous seven trips to that particular theater combined. Luckily, being an AMC stub member comes with the perk of having priority in line when it came to purchasing tickets and I had already purchased my tickets online prior to arriving so I skipped the awful line of patrons that only had two people working the ticket booth. Crossing into the concession stand was an equally cesspool of bodies all standing in line waiting to get items. Luckily, my usual movie ritual of getting my infamous coke slushie has been on the backburner as of late so I avoided the line and straight to the theater.

Where we were met with security guards! Nothing screams abort mission like big men in black who has been granted special privileges to innately ask like douchebags. I assumed they were there for the influx of kids who were probably trying to ninja themselves into the It which is rated-R. Oh the bad memories I have with those guys back when I was younger…

Anyway! We arrived just before the previews started to the theater being relatively empty. It was quite the surprise. I made the wrong assumption that we would be forced to pick some questionable seats because of our tardiness. So we picked our seats in the middle where my friend loves to sit and got comfortable. Now… I know it is very childish and someone petty of me, but I hate it when you people directly behind me when there are seats empty to the left and right of me. I have come to the conclusion that people don’t know what to do with their legs after sitting still for a long period of time and they start doing highly annoying things that can make you want to strangle them with piano wire while they dangle off something high. Within minutes, we get a group that decides to sit behind us. But I am a reasonable person, I know this movie is going to be packed and I have already submitted my soul to check out so we can’t go back now. Besides, there is still a chance that they don’t do that and I am an optimist at heart.

But then the first wave of tweens flood the theater. Loud, obnoxious, and ready to have a good time! Some on their phones, talking to friends, others recording themselves entering the theater. And you can tell it was going to be bad because before they arrived, it was relatively quiet with pre-movie chatter.

In my head, I started to place bets with where they were going to sit as the climb the stairs on both sides. The loudest of the groups start two rolls behind us and within minutes, the couple that sat directly behind us moved. That prompted half group A to move directly behind us by means of jumping over the chairs. So to avoid being right next to the bad experience, we decided to the relocate to a somewhat empty row further down near the screen only to be invaded by Group B who sat directly next to us on the right side. Behind us was another family who did not understand the meaning of inside/whispering voice and in front of us was a group of chronic social media addicts. Mind you, all these wonderful traits were identified BEFORE the movie started.

Just as the movie started, however, those security guards that I mentioned earlier came in and started checking tickets. Their method of checking tickets and that escorted a couple of them out but I would soon learn that they failed. Miserably.

As soon as the movie started, they get the talking on all cylinders. From all directions.

Now, my good friend and I are at odds on what is more annoying. Group B had a loud mouth that talked constantly, completely overselling her reactions and being over

the top about the ordeal. At some point n the movie, two kids snuck into the theater and sat to my left and just started talking on the phone and repeating the same responses as the girl in group B. The people behind me didn’t start eating anything until about twenty-five percent in, result in loud plastic ripping, smacking on whatever they were eating and awkward timed straw movement. Those in front of us must have not be entertained because they were constantly on their phone, texting, going through snaps, and checking Facebook. IN THE MOVIE. (Without the common decency to at least turn the brightness down though that wouldn’t have helped at all.)

I can deal with talking. Especially if it ultimately makes the movie experience better. So a few well-timed outburst is fine by me and might even be welcomed depending

on how scary the movie is. (Mind you, horror isn’t my genre at all.) But I draw the line with the cell phones. It is pretty sad that people are so attached to their phone that they can’t go a mere two hours without checking it. This is even worst when you pay money for something to keep your attention and completely ignore because of your addiction. If you need to check it that bad, just get up and step out for a moment. Don’t break the immersion for someone else who could be enjoying the movie because you have an itch.

My party member ( the good friend who was with me) claims that talking ruins it all and I can’t argue you there either. Like I said, I don’t mind some outburst but they

the way they were talking just made you want to gag their mouths with socks and beat them with aluminum bats. They echoed each other! Each of the groups that I mention would repeat the same thing that the other group said no less than ten seconds after one group said it. I am not lying either. Hell, the kid failing to be incognito on his phone a few seat down was yapping on the phone about the movie. I could argue that a similar event was happening where we were originally sitting because you could hear them up there as well.

And this lasted the entire movie. Every jump scare, every moment of silence that was supposed to conjure tension and build the fear meter was completely ruined. Hell, 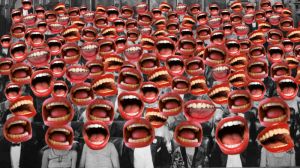 even when nothing was going on, they were still talking! It was like we were at the house and I couldn’t leave because my parents paid money and dropped me off. So just picture it. All around you. Talking, cell phone lights, and loud eating. It drove me mad. (And to think that the CEO of Stars was thinking about allowing phones inside of the theater!? Promoting this horrid and quite disturbing addiction… Why would anyone even consider this a thing!?)

And that’s not all! We also had one of those people who brings their baby into the theater to ruin it for all of other paying customers! Please level with me for a second. I used to hate the idea of someone brings a child that does not understand the concept of being quiet or isn’t capable of such a feat. It isn’t fair to the other customers when you baby goes off into a crying fit or you can’t control your bad ass ADHD kid. But lately, I have been a bit more understanding. If said event should occur and you cannot get it under control quickly, politely just step out until you do. That is all I ask. I think that is the responsible and respectful thing to do. Does it suck? Yes, it does but people need to think about others… at some point. This couple just allowed their kid to just yell and scream. I don’t even think they considered the notion of getting up stepping out. Parents like that should be run over with spike tires… twice.

Near the end of the movie, our trusty but useless security guards came back to monitor the last ten minutes of the movie and everyone politely decided to be quiet but at that point, why not finish the deed? Just start yelling and blabbing at screen!?

Despite all of this. The movie was still good. I can’t say it was necessarily scary because of my experience. There was no way let your imagination take hold and genuinely get sucked into the world. Jump scares failed because I wasn’t into the movie. I was constantly trying to mentally silence all those around me while ignoring the lights from people phones. Oh not to mention that the original group of kids left and was replaced with another four kids that were even louder with no bass in their voice. The kids were nowhere near puberty so everything carried that disgusting high pitch voice that mirrored the kids in the movie. It was horrible!

I felt like I needed to share this. To remind myself every time I stumble upon this in future to never forget.

Avoid opening weekend if possible. Or there is always this…

Rant Over. (Excuse the typos please. I tried to catch them all but I was never good at pokemon… >_<)